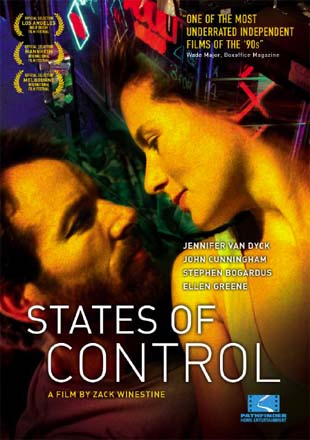 Chosen as one of New Times' Top DVD Picks of the Week!

"One of the most underrated independent films of the '90s... The lead performance by Jennifer Van Dyck is hypnotic and devastatingly real and would have earned an Oscar nomination had the film been backed by the kind of money that usually supports such contenders... Zack Winestine likewise reveals himself a filmmaker of stunningly mature and observant abilities"
-- Wade Major, Boxoffice Magazine

"States of Control delves rigorously into our longing for some sense of being in charge of our destinies"
-- Kevin Thomas, LA Times

"Combining a laser-focused eye for painterly details and a sharp sense of purpose and emotion, Winestine has built an impressive body of work which demands the attention of everyone addicted to serious cinema... If any indie film is deserving of a full-blown release, it is States of Control"
-- Film Threat

"A hard, mercurial polemic that gets under the skin... Zack Winestine's formidable States of Control will not be for everyone, but those who rise to the challenge can prepare themselves for a movie rich with ideas in today's increasingly conservative marketplace"
-- filmcritic.com

"Driven by admirably complex ideas about psychological manipulation, the legacy of '60s radicalism and the numbing sterility of a life lived entirely through second-hand experience"
-- TV Guide Online


Order STATES OF CONTROL on DVD
Distributed by Pathfinder Pictures