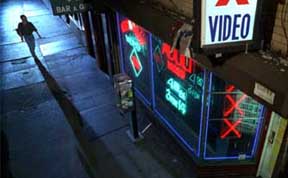 ABOUT STATES OF CONTROL

Lisa, discontent with her career and her marriage, yearns for a powerful disruption of her controlled Manhattan existence. She turns to the friendship of an older man, a theater director who proclaims a seductive political nihilism. Inspired, Lisa starts testing the limits of her will and her desires: she explores pornography, forces herself to go for days without sleep, and engages in escalating acts of everyday rebellion.

As her husband and friends fall away, Lisa takes an explosive action to transform her life. Isolating herself from society, she risks everything to fulfill her desire for final release.

The emotional depth which actress Jennifer van Dyke brings to her portrayal of Lisa is matched by the film's visual intensity. Growing up in the Sixties, director Zack Winestine was fascinated that many of the decade's radicals who went underground spoke at great length about changing the world, but actually seemed obsessed by an even greater need to change themselves.

"I was interested in exploring a character who wants to strip away everything inessential, to stop making compromises, to concentrate all of her being on achieving a more immediate experience of the world", notes Winestine.

Lisa gradually abandons words -- the final third of the film passes almost entirely without dialogue. At the film's end she has transformed herself. Whether she has achieved a fulfillment many secretly want, whether she has paid too high a price, only the viewer can decide.