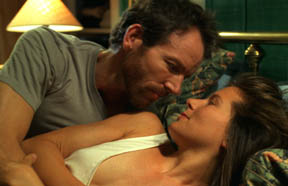 I was also impressed by States of Control, a strikingly assured and intelligent directorial debut from American Zack Winestine about an artistic woman whose sexual and spiritual malaise eventually leads to an identity oddly akin to that of the Unabomber.

Unlike most US indie film-making, this is unashamedly an art film that, with its lusciously sensual cinematography, sexual tension and inner conflict, strikes a hypnotic mood full of longing and surges of eroticism.

It's nice to see a US independent that aspires to the condition of cinema and not to that of television with extra profanity.

The visual and musical motifs of States of Control both hauntingly evoke emotional tone and act as homage to classic films. Appearing with emblematic frequency, brooding clouds illuminated by a full moon recall the nature based mysticism of certain films by German artists of the 1920s and '30s. Two that come readily to mind are Sunrise, F.W. Murnau's harrowing but redemptive tale of love, and, less benignly, Leni Riefenstahl's The Blue Light. In Riefenstahl's directorial debut a pure and fearless young woman, entranced by the ethereal light of the heavens, falls from a mountain peak to her destruction, the tragic sacrifice deified forever as sacred rebellion. One yields to the temptation to delineate these cinematic references not least because debuting director Zack Winestine acknowledges as subtext the fine line between mystical impulse and fascism in modern society.

In States of Control, Lisa records her absolutist journal entry after 51 sleepless hours, part of a self-designed spiritual boot camp, a deliberate effort to exert will over body, to strip the soul of artificial inhibition to hold a finger to the flame without flinching. Dutifully locked in a dead marriage and unsure of her talent as a writer, Lisa, powerfully played by Jennifer Van Dyck, yearns for a powerful disruption of the controlled existence she leads in Manhattan's artistic mid-bohemia. Thwarted by the emotional and physical impotence of her professor husband, Lisa turns to the friendship of an older man, a theater director who espouses a seductive political nihilism. On her own she begins to explore the risky territory of pornography, erotic obsession and political zealotry. Ultimately politics and eros both fail to offer her release from suffocating desperation. When her husband and friends begin to fall away through a series of ordinary circumstances, Lisa decides to take the final steps to isolate herself from society, to take one action that will consummate her desire for final transcendence.

This is heady stuff, seldom seen in American feature film as it lurches toward the millennium.