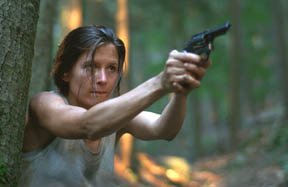 There's a perverse fascination in tracing a character's slide into a nervous breakdown. In States of Control, I had anticipated the usual quiet devolution of the thirty-something writer played by Jennifer van Dyck.

Director Zack Winestine, a cinematographer who began his career working as an assistant on Stanley Kubrick's The Shining, employs a docudrama format that skirts the edges of surrealism. We may not identify with his nihilistic heroine, yet it is impossible not to recognize the same damaging forces of daily existence in our world.