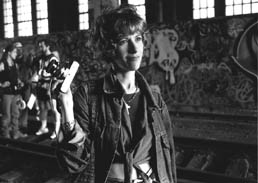 Review of the Mannheim International Film Festival
by Ron Holloway


Mannheim has traditionally been a place to discover new, talented film directors from Eastern Europe. This year's Mannheim-Heidelberg was a festival where you could also discover independent film from the entire world...

Three young and very independent directors stood out for their fascinating cinematic structures and aesthetic sensibilities. Knut Erik Jensen's Burnt by the Frost (Norway), winner of the Rainer Werner Fassbinder prize, depicts a young Norwegian's struggles with his conscience over working as spy for the Russians after the German occupation. Masatoshi Takeuchi's The Assassin (Japan) investigates the mental cooperation between a murderer and a genius in a psychological thriller whose soundtrack was influenced by Noh theater. Zack Winestine's States of Control (USA) introduces the gifted Jennifer van Dyck as a desperate young woman who works at a Broadway theater while breaking away from her bad marriage to a self-satisfied University film professor.