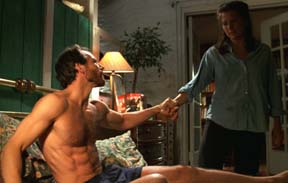 Michelangelo Antonioni's L'Avventura might have a hell of a time being released in theaters today. His trilogy of films starring the beautiful actress Monica Vitti (expanded into a quartet if you include Red Desert) contemplate the experience of a bored, frustrated woman in a heavily industrialized society ruled by false ideals of consumerism and power. The end of the world was not an apocalyptic fire, but a deadening malaise waking up in the dawn of the dead. There's no exit, whittling away the days with the distraction of fast food and shopping malls.

In 1960, L'Avventura was a box office smash despite its harsh critical reception at Cannes, where frustrated critics misunderstood its open-ended message for pure emptiness. What they lacked the ability to see was that very emptiness becoming the core message. This can also be said for Zack Winestine's challenging new film, States of Control, which picks up right where Antonioni left off. The times have changed, and this heroine, Lisa (brilliantly played by Jennifer van Dyck, Series 7) is not content to live a life of passive alienatation. She's gonna blow her superficial life apart and create something authentic and new, no matter what the cost.

Lisa has fallen into routines, measuring out her days in teaspoons. A self-proclaimed failed novelist, she's stuck in a sheltered Manhattan life coordinating mundane secretarial chores at an Off-Off-Broadway Theater. Her husband Abel (Stephen Bogardus, Love! Valour! Compassion!) is an impotent bore who fails to challenge her sexually or intellectually. This is most notably felt in a funny-sad scene when he attempts to tell an amusing anecdote about the "Great Chinese Trombonists." The gag falls flat, not achieving the desired response. The more they try to hold on to each other, the closer they come to drowning.

Things quickly liven up. Inspired by the anarchic musings of a jaded theatre director (John Cunningham), Lisa performs a series of experiments, some comical and others disturbing, to break through the web of artificiality. Her training consists of sleep deprivation, sexual deviance, sampling pornography, smashing open a locked door with her bare fist, and determining how long she can hold her finger in an open light socket. By pushing her body to the limit, she hopes to achieve the ultimate transformation, whatever that is.

The coda of States of Control places Lisa on her own as the extraneous parts of her life fade away, including her principles, her friends, even her language. Played entirely without dialogue, the climax is a razor-edged adventure as Lisa embarks upon the final, explosive stage of her growth. Comparisons to the Unabomber abound, but Lisa's philosophy comes closer to David Cronenberg's unsettling Videodrome mantra, "Long live the New Flesh."

There's something borderline fascistic about Lisa's regime, made latent in the fiercely dramatic sturm und drang of Richard Termini's classical score, or the beautiful and startling images of clouds parting in the sky. Those mystical images of nature bring to mind Triumph of the Will director Leni Reifenstahl, visually referenced throughout States of Control. Susan Starr's austere cinematography (in collaboration with Winestine, an experienced director of photography himself) produces an appropriately clinical God's Eye View, in the hollow valleys of New York City skyscrapers or the cramped apartment space Lisa shares with Abel. Discomfort is the order of the day.

Anchored by a strong central performance by van Dyck, States of Control is a hard, mercurial polemic that gets under the skin. Winestine's politically charged agenda sometimes gets the best of him in scenes that seem more conceptual than dramatic. Despite the occasionally academic tone, there's no denying that Lisa's extremities cast an eerie spell.

Zack Winestine's formidable States of Control will not be for everyone, but those who rise to the challenge can prepare themselves for a movie rich with ideas in today's increasingly conservative marketplace. There's also a bleak humor in the lengths to which Lisa goes to achieve her vision -- I mean, who wouldn't laugh at the notion of blowing shit up and spending the rest of your life living in a cave? Yeah, it's all funny games until the rationality kicks in: something just broke.