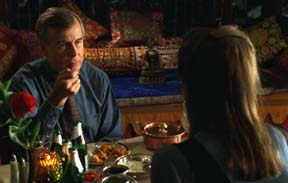 Background Noise:
Trying to engage life while living in a consumer culture
by Tamsin Todd

Early on in States of Control, female lead Lisa (Jennifer van Dyck) explains to a friend why she still buys 78's. "All this new technology only highlights our inability to hear," she says. "A great listener would...listen to one passage at a time, refusing to move on until she completely understood what she'd already heard. With 78's you couldn't play a record while you were doing something else because you had to pay attention. When LP's were introduced everything became background music." Is it possible to live an engaged life in a consumer culture filled with background noise? That's the difficult question writer/director/producer Zack Winestine sets out to explore in his thought-provoking debut feature-length film.

The story centers on Lisa, who feels trapped in her sterile Manhattan life. Her job in a theater is unchallenging, her film-professor husband is impotent, and she's unhappy with the novel she has written in her spare time. At first she turns to friends for advice. She befriends a director whose anarchistic credo -- "The others, they want property, permanence. We want no systems, no order, no platitudes, and no programs" -- appeals to her. Other friends encourage Lisa to pursue her art, leave her husband, or leave Manhattan for Los Angeles. But Lisa sees that these aren't real solutions. "No more stories," she writes in her diary. "They are just an excuse for the failures of my own life." Seeking a more active engagement with the world, Lisa starts experimenting with the way she lives. She turns vegetarian. She watches pornography. She forces herself to stay awake for days until her senses sharpen. Gradually Lisa's experiments escalate, building toward a much larger, violent act that will change her life forever.

Winestine's background is as a director of photography (among his credits is Stanley Kubrick's The Shining, which he worked on as an assistant during a semester off from Princeton), so it's no surprise that States of Control employs rich visual imagery. Shots of turbulent skies, leaves, and flames illustrate Lisa's desire to intensely experience the physical world. As Lisa abandons the social world of books and plays and conversation, the film similarly abandons words. In the last part of the film there's almost no dialogue, only images of Lisa leaving her Manhattan life to take up an independent life of radical action.

States of Control isn't a film for Hollywood blockbuster buffs: fans of disaster movies and romantic comedies will find this slow-paced, introspective film frustrating. But for anyone tired of cookie-cutter characters and unchallenging plots, States of Control has a lot to offer. (In fact, States of Control has already found success on the film-festival circuit: it premiered at the Los Angeles Independent Film Festival, and has been selected by the Melbourne Film Festival and the International Filmfestival Mannheim-Heidelberg, among others.) It's a carefully crafted film in which nothing is irrelevant or gratuitous; as Lisa would put it, there's no "background noise." And it's refreshingly ambitious in its willingness to ask big questions. It's a film that makes you pay attention.